Several years ago, I started a live video stream of our church services over at Sherwood Baptist Church here in Oklahoma City. The problem I quickly encountered was that we didn’t have enough space in our auditorium to have multiple manned cameras. Thus began the search for the perfect remote control camera system. There are tons of great robotic cameras on the market these days, but they all have one major flaw – the HUGE price tag! You can easily spend $4,000 or more for a single PTZ camera like this Sony model, and an entry level 3 camera system like this one from Kingdom starts at over $6,800!!! So the obvious solution is to get a decent consumer grade video camera and bolt it on top of a pan tilt zoom mount right? Weeeeeelll…..NO! Not quite anyway.

While there are many great consumer grade HD cameras on the market, there aren’t that many options to choose from when it comes to pan tilt brackets, and even fewer if you want zoom control. A really nice PTZ head like this one from JVC  is more expensive than the whole camera above, and won’t interface easily to consumer grade cameras. So I settled for a Bescor MP101 which is about $130 and gives you a good range of motion in a nice compact unit. What it does not give you is a good user interface. The control pendant that ships with it has a 4 way rocker switch that allows you to pan, tilt, or both, but only has a single slider to control the speed of movement. To make this unit really useful, it needs to have fully independent and proportional panning and tilting, such that the farther you press the controls, the faster it moves in that direction. For the last few years we continued to use this unit in conjunction with a Canon LANC zoon controller, but it was always frustrating and resulted in poor video production values. 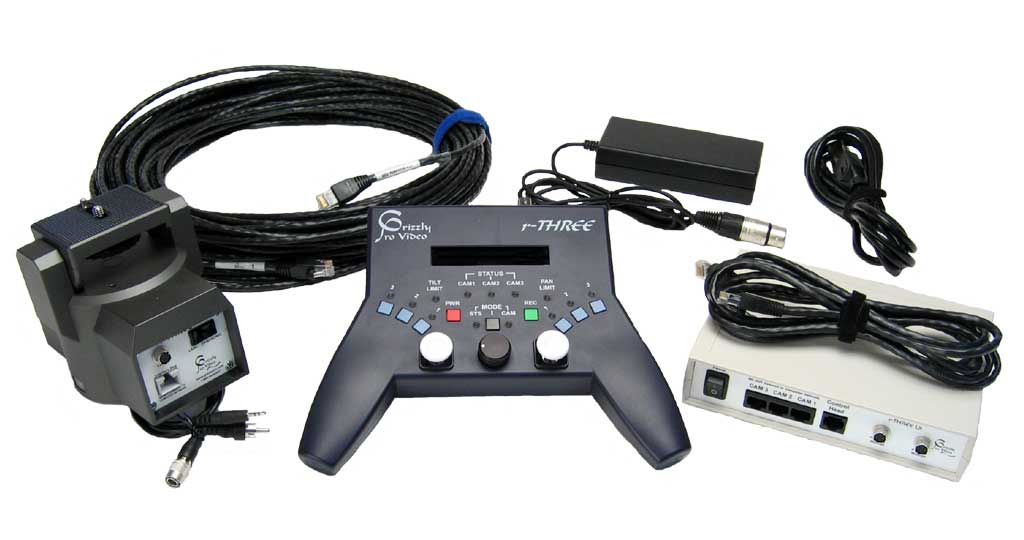 Grizzly-Pro has really nice system that uses a heavily modified version of the Bescor head and has added proportional control and zoom capabilities and can control up to 3 cameras from one remote. Everything is wired up on Cat-5 cable, and compared to the previously mentioned systems, it is a real steal at just shy of $3,000 for a 3 head system!

Being that our church does not have a lot of money, and we don’t need a lot of the features on the R-Three, and it is extremely difficult to run wiring through the ceiling in our building, I decided that we should develop our own version. I built several pan-tilt mechanisms out of 1/2 inch and 1/4 inch acrylic, and tried several different variations and combinations of gears and motors before deciding that designing and building a whole new mechanical platform was un-necessary and expensive.  So I started reverse engineering the Bescor MP101 to try to interface with it and build a better control system for it. The first thing that I tried was to feed PWM signals into the remote port in an attempt to get the pan and tilt motors to run at separate speeds. This worked to some extent, but not well enough to make it truly usable, so I pulled the circuit board out of it and decided to interface to the motors directly. By connecting PWM motor drivers directly to the motors, and controlling them from a microcontroller, I was able to get the independent operation that I needed, but at low speeds and high zooms, we were noticing a bit of jumping from the video.

About this time, Sam started helping me with this project, and we were able to upgrade the microcontroller to the Propeller chip from Parallax. Within a few hours, he was able to reverse engineer the LANC protocol and get me zoom control, and then we started working to smooth out the low speed jitters. By implementing a motor voltage feedback loop, we are able to detect when the motor brushes are in contact with two comutator sections, and compensate. This technique has allowed us to almost completely eradicate the jitters that the original head has at low speeds under tight zooms.

The next challenge was to perfect a user interface that would make the system easy and intuitive to operate. We decided that we should be able to control 3 heads from 1 remote, and that truly intuitive control would only come from the use of motion sensing accelerometers, so we settled on a 2.4GHz wireless interface (not Wi-Fi) and a Wii Nunchuk as the control interface. The way this works, is that you can use batteries or AC adaptors to power the heads, and then plug an off the shelf Nunchuk into the remote control which runs on 2 AA batteries, slip the remote into your pocket and go. By pressing the large button on the Nunchuk, you activate the accelerometer interface and the farther you tip your wrist, the faster the selected head moves in the direction you are tipping. The joystick on top can be pushed forward and back to provide fully proportional zoom control, and left and right to provide fully proportional pan control, which can be added to the pan speed indicated by the amount of wrist tip. Pressing the small upper button on the Nunchuk cycles through the head selections, allowing you to switch between heads quickly and easily.

We are in the process of finishing up the circuit designs and the circuit board layouts for both the remote and the heads, and hope to be able to offer this system as a retrofit kit consisting of the remote (provide your own Nunchuk) and the fully assembled circuit boards for the heads for under $600. If you need a completely assembled and tested system, we can provide that as well, but we do not have a final price at this time. If you are interested in pre-ordering this system, please drop us an e-mail or give us a call.